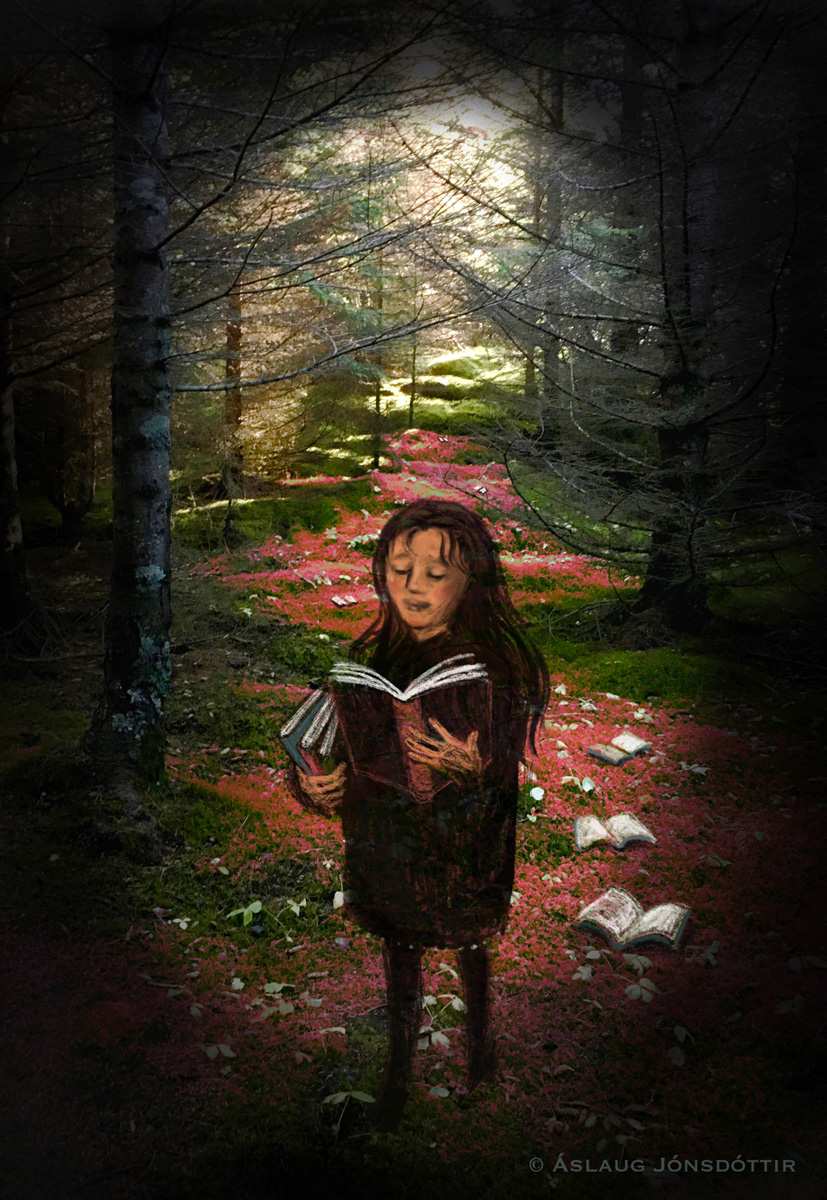 Sunday illustration: I made this illustration as I pondered over the ecological footprint of books. (This is the very short version of the text above). It is hard to get the facts straight about e-books vs printed books, obviously both use resources and energy. As does this blog, and the digital illustration above. As I see it, it’s not the question of choosing one over the other, but rather to make both kinds as eco-friendly as possible. The printed children’s book still wins over the e-book according to most research concerning engagement, comprehension, vocabulary development, etc. I like the digital media, but I love the paper book, the book as an object. When it comes to printed books we should in theory be able leave the books in the woods, or give them back to nature after their hopefully long life helping us to find our way in world. 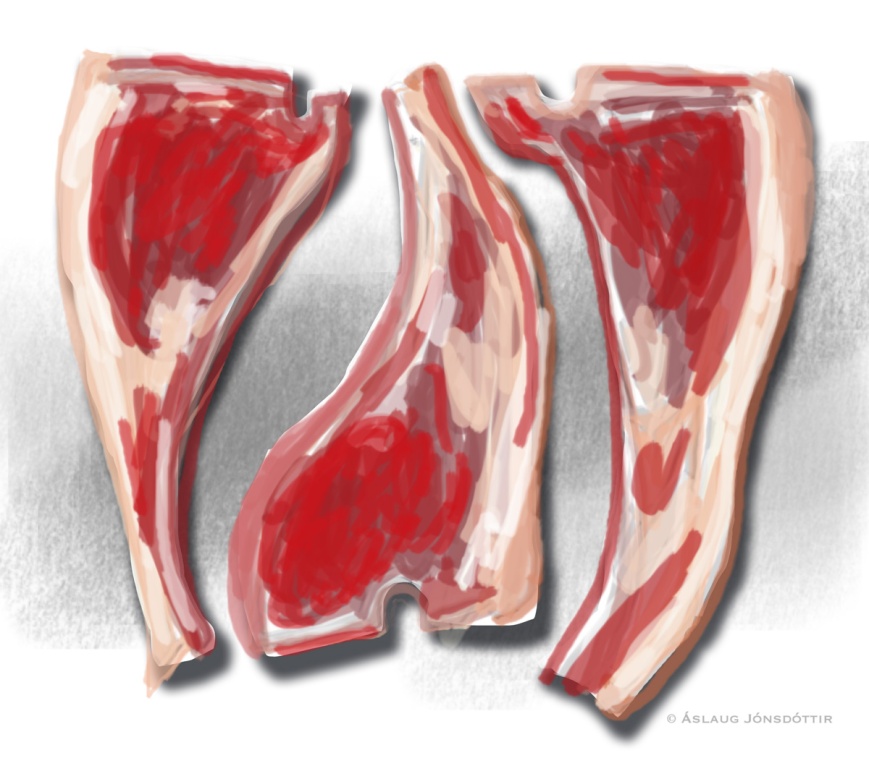 [Sorry! No English translation available! Well, it’s a long story and a lot of crap …]

♦ Message: Sorry, no translation available. This is just my rant in a fog of flu – a message from a bottle of cough-mixture: few thoughts on refugees of war and disasters. I recommend the short video from Studio Flox below.

Every Shirt Matters from Studio Flox on Vimeo. 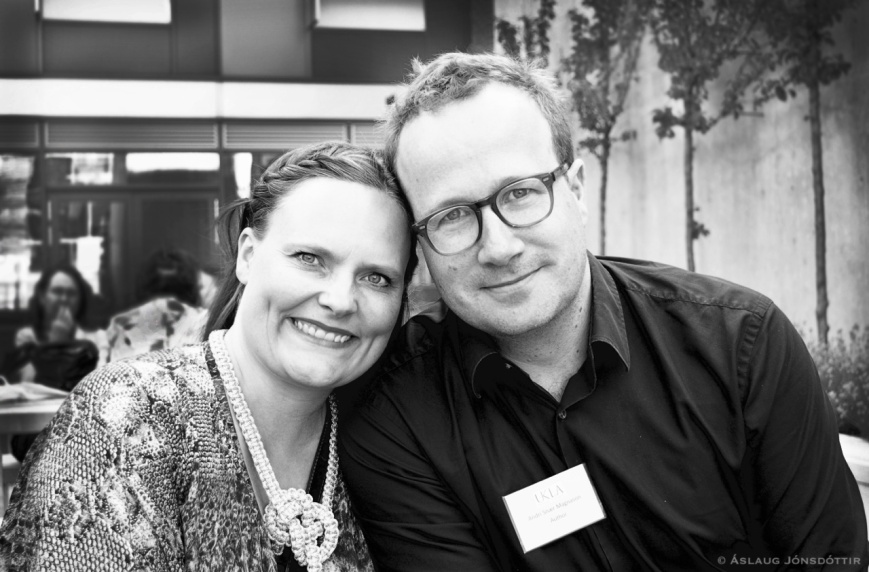 ♦ President election in Iceland: Above written is my statement of support for a fellow writer and a friend: Andri Snær Magnason, who is running for President of Iceland. I think Andri Snær would be a great president, a new fresh voice in that office, a voice that not only Iceland needs but the world community as well. Iceland may not be a powerful country but we sure can have a strong voice, a passionate and a spirited one. Andri Snær Magnason has such a voice. 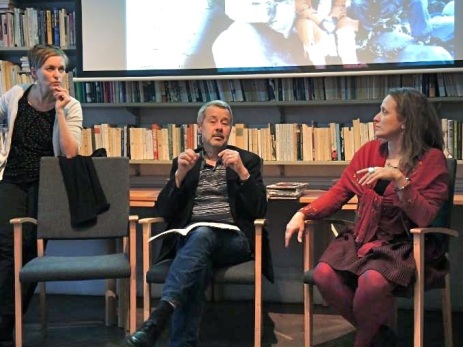 ♦ Last September in Sweden. Warning: Old news! I am just catching up on some old reports in my attempt to collect information about my work on this site. In brief: September 22. – 25. 2015, I visited Stockholm and Göteborg in Sweden.

Monsters in Stockholm: On Sept. 22., along with my co-authors Kalle Güettler and Rakel Helmsdal, we had a book talk at Författarnas hus, the house of The Writers’ Union of Sweden in Drottninggatan. We were invited by the The Society Sweden-Iceland and The Society Sweden-Faroe Islands, arranged by our wonderful host Nanna Hermansson chief of the Society. Her article (in Swedish) about our visit is available here: „Monsterböcker för barn och vuxna i nordisk samverkan“.

Rum för barn: We visited the fabulous Children’s Library and Culture House, Rum för barn, in Stockholm and met with the chief librarian Helena Gomér. Hopefully will the exhibition „Visit to the Monsters“  find its way to this ideal home of books and creativity for children.

Royal etiquetts: In Stockholm we witnessed parts of the ceremonial occasion when a new Icelandic Ambassador presented her credentials to the King of Sweden. A parade coupé drawn by four horses brought our new ambassador to the Palace. After the ceremony we were invited to Ambassador Estrid Brekkan residency to celebrate. 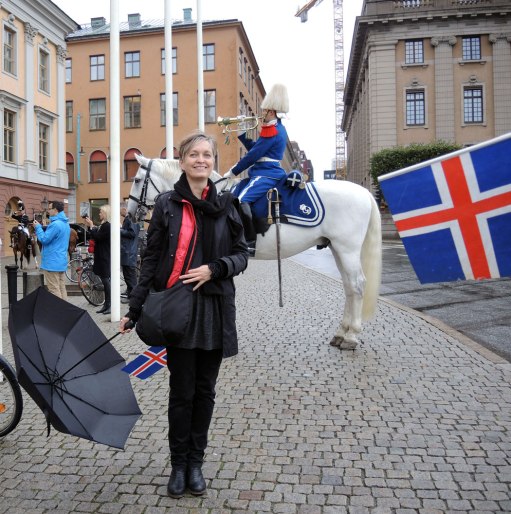 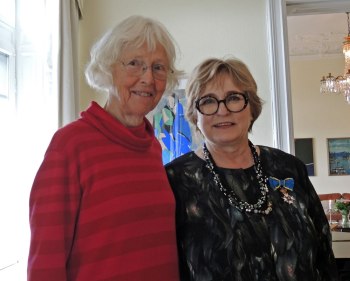 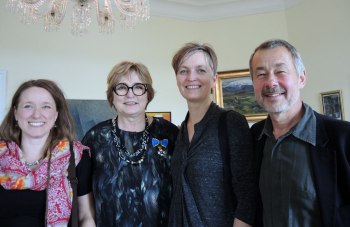 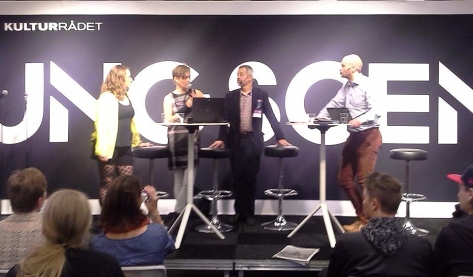 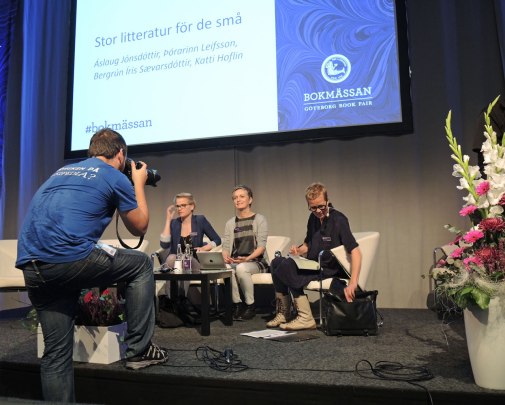 Biskops Arnö: The seminars at Biskops Arnö are well known in amongst authors in the Nordic countries. And this is the place where the monster series had their start. A piece about this fact is here on Biskops Arnö’s website, also linking to news about Ingvars Lemhagen’s book release at Göteborg Book Fair in September 2015 where is book, Eftertankens Följetong, was introduced. A chapter in the book is dedicated to the collaboration between me, Kalle Güettler and Rakel Helmsdal resulting in a series of eight books and perhaps more to come … 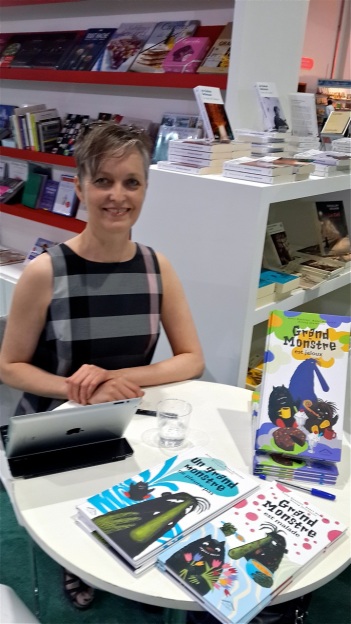 At the French stand in Abu Dhabi. Photo © Lama Ammar.

♦ Interview – article: At the International Book Fair in Abu Dhabi 2015 I was interviewed by a reporter at Sharjah 24 news website as one of the participating artists at the fair. Below is the article or interview in Arabic. To view it on the site follow this link: article in Sharjah 24, published on 11. May, 2015. The author, Lama Ammar, kindly granted permission to publish the article here on my blog. My meeting with Lama Ammar at the fair was not only a delightful one: it led to a five-book contract with HUDHUD publishing – thanks to Ammar’s expertise, generous advice and obvious talent to connect people.

About the author: Lama Ammar is a translator and reporter at Sharjah 24 website. Her roots are in the war-torn Syria, but she now lives in Abu Dhabi with her husband and young daughter. 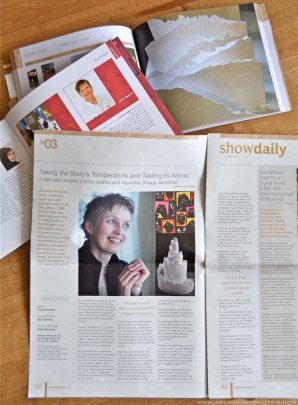 ♦ Interview – article: This interview appeared in Abu Dhabi International Book Fair’s magazine: Show Daily in the first days of the fair. I was granted a permission by the author, Marcia Lynx Qualey, to publish the article here on my blog. Many thanks to Marcia for the permission and her professionalism.

About the author: Marcia Lynx Qualey is a freelance writer, book critic, editor and a cultural journalist for World Literature Today, the Guardian, the Believer, Al Masry Al Youm English edition, to mention a few. She also runs a popular blog: Arabic Literature in English. Marcia Lynx Qualey lives in Cairo, Egypt, with her husband and three children.

Taking the Story’s Temperature and Tasting its Words:
A talk with children’s book author and illustrator Áslaug Jónsdóttir

Jónsdóttir fell into the world of children’s books soon after graduating from visual arts college in 1989. Her first book was published a year later, and since that time she has written and illustrated a number of award-winning children’s books, written three children’s plays, drawn for newspapers and magazines, and has worked on stage design, all of which has earned her plaudits from around the world. She wrote her first book because she was asked to, she said in a pre-fair interview. She was looking for work after graduation and had a slim picture book in her portfolio about a yellow bird that finds a golden feather. The book had no words in it, and a publisher asked if she could write the story down.

“So I did,” Jónsdóttir said. “To publish a book without any words in it was probably unthinkable in Iceland at that time. And perhaps still is. Writing is highly valued in Iceland, and the visual arts still have a way to go to reach the same status. So a book without words was not a proper book.”

The success of her first, image-driven book encouraged her to do more projects for children. Over the last twenty-five years, she has come to believe strongly in the importance of graphic design to the whole book experience. Design, she said, “is very much underrated in children’s books. So the writer in me has great respect for the designer and visual artist in me, and vice versa.”

These two elements working together is critical, she said, and writing is definitely not primary. Jónsdóttir said she writes because she draws, not the other way around. “I don’t agree that the illustrations are there to support an idea that is created in words. The words might just as well be there to support the pictures.”

When she is both the illustrator and author, Jónsdóttir said that she can develop both aspects of the story simultaneously. But when she illustrates the texts of other authors, a different approach is required. “When I receive a manuscript, I have to find that certain atmosphere to suit the pictures for the story. One has to take the story’s temperature, taste the words, and somehow make it your own although you didn’t write it.”

“Every book deserves its own special visual world,” she said. “I never just pick a style because it’s easy for me to use.” Jónsdóttir has worked on a number of high-profile projects. She illustrated and designed Andri Snær Magnason’s well-loved The Story of the Blue Planet, which has been widely translated, including an English edition from Pushkin Press. The Story of the Blue Planet, she said, was “quite a task.” It took a while before they decided on a final form. “It started as a 60- to 70-page small-sized book with black and white illustrations, but ended with almost 100 pages and full-color images in a larger format.”

Designing the book wasn’t just about drawing pictures, Jónsdóttir said. However uninteresting the layout may be, “the text is always a picture on the page. Letters and words are visual pictures too. A book is a visual thing!” Jónsdóttir, who has also written three plays for children, said she feels that picture books are “very much in kinship with theater.” In both of them, she said you are “setting the stage, choosing the right backdrop, drawing the curtains.” Once a reader opens a book, he or she is “entering and accepting the world that’s behind the curtains.”

Her advice to emerging writers and illustrators was adamant: “Never, ever think that it’s just a children’s book. Don’t underestimate the readers because of their young age. Put everything you have in your work, and then a little extra more.”

Illustrating and writing for children is particularly enjoyable for her, Jónsdóttir said, because “it allows me to dwell in that wonderful and sometimes not-so-wonderful world of childhood and to study topics and feelings the way a child would. It keeps me sane in a mad world.” She said that, no matter how many children’s books there are, the world will always need more.

“It is a genre that has kept alive all the honest ways of telling a good story: tales that are humorous, clever, poetical, magical, adventurous, silly, incredible, sad, and more. Stories that can be read by everyone in the world. Isn’t that something?”

This is Jónsdóttir’s first time in Abu Dhabi, and she’s looking forward to it. “I hope I meet some eager publishers who would like to translate and publish my books. I hope I see some inspiring books I can take home with me. Unfortunately I don’t read Arabic, but I can always admire the illustrations and the beautiful lettering!” 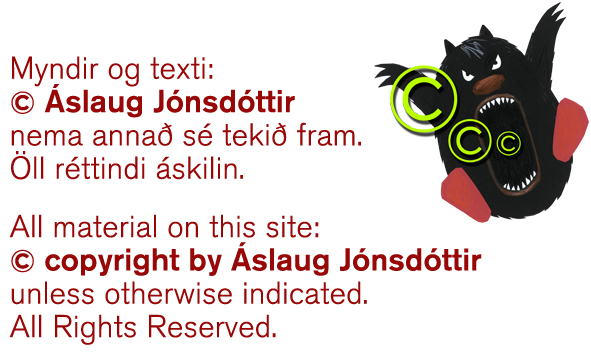 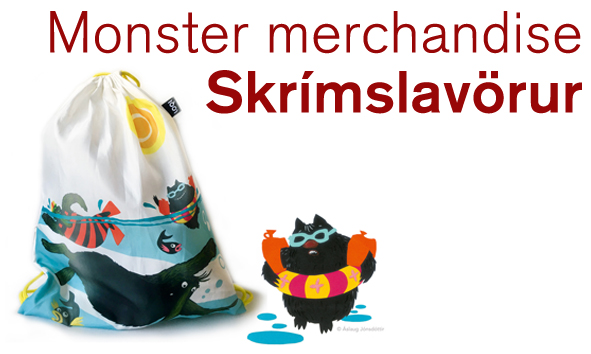 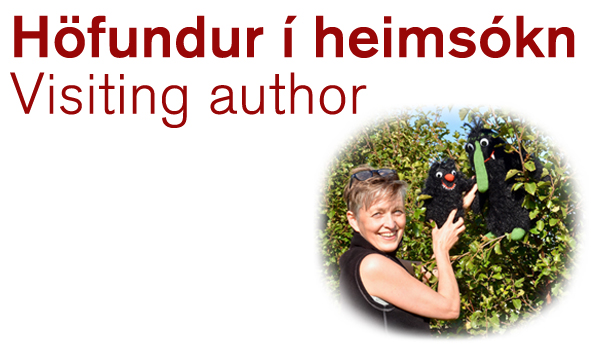 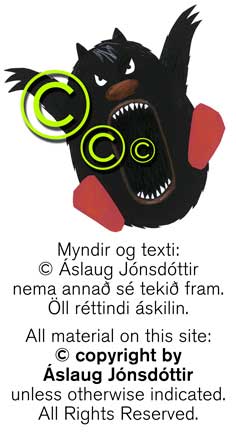